A Sheriff's sale is a sale where foreclosed property is being auctioned.

Sheriff's sales are held differently in different counties and different states. In Du Page county, Illinois, the Sheriff sale is held at the Sheriff's station and jail, located at 501 North County Farm Road, in Wheaton, Illinois.

The Sheriff sale of Real Estate is held on Tuesday and Thursday at 10:00 a.m. 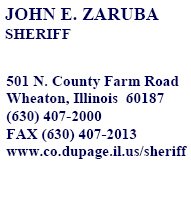 Let's discuss what a sheriff's sale, or sheriff's auction, is.

First, a homeowner falls behind in payments, and the mortgage bank files a foreclosure lawsuit.

Once the foreclosure lawsuit, or case, is filed, the home is said to be "in foreclosure."

Eventually, the bank gets a judgment of foreclosure, and then must wait until the homeowner's "right of redemption" expires.

A few days after the redemption period ends, the property is SOLD at the sheriff auction.

The purpose of the foreclosure property auction is to raise money to pay the bank back for the money that the bank loaned to the homeowner.

Anybody can bid at the sheriff's auction, provided that they can afford the property that they bid on.

At the foreclosure property auction, the bank usually bids, just like any other bidder. Actually, the bank is the first bidder, or opening bidder.

On the day before the sheriff's sale, people can call the sheriff's office and learn the amount of the "opening bid" that will be placed by the bank.

In earlier times, the opening bid was commonly equal to the amount owed on the mortgage, plus the foreclosure fees. Now banks tend to bid a bit lower on average, because property values have dropped.

After the bank's opening bid, other bidders may make their bids. The highest bidder pays for the property, and becomes the owner.

Commonly, nobody wants to bid as much as the bank bids, and the bank therefore is the highest bidder, and becomes the owner of the home.

So you see that although people talk about how the bank took the home away in foreclosure, the actual truth is that the bank bid more than anyone else at the foreclosure property auction, and bought the home from the court.